END_OF_DOCUMENT_TOKEN_TO_BE_REPLACED

See the webpage listing all Training Events for further details.

Have you ever noticed that in life you never stop learning?  Sailing is definitely like that.

If you are interested in taking a RYA practical course, I can now teach Comp Crew, Day Skipper, Coastal & YM prep course so read on… 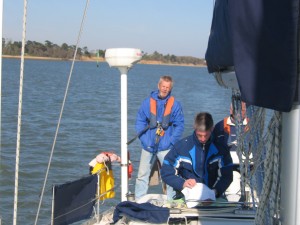 END_OF_DOCUMENT_TOKEN_TO_BE_REPLACED

1. All of the above events will be run out of the Hamble near Southampton.

2. For the full list of planned events please see the 2010 Sailing Programme.

Kieran Madigan reports on a rather wet and windy introduction to sailing:

Why did we do it ?  Because we could!

For some years now we have, as a family, wanted to give sailing a bash. Having previously only encountered life on the waves on a Cross Channel Ferry it was a desire to see what made people want to get out and onto the water. Would we be bitten by the bug and become sailors? The BTOSC Introduction to Sailing weekend was the perfect opportunity to find out. END_OF_DOCUMENT_TOKEN_TO_BE_REPLACED

Over the years a number of BTOSC Club Skippers have gained a good deal of their skills and experience within the Club. They have benefited from the experience and coaching of other Club Skippers, gained Coastal Skipper qualifications and ultimately gone on to qualify as Offshore Yachtmasters and gain Commercial Endorsements to enable them to become Club Skippers.

The “Mates Programme” is intended for Club members who have achieved a good level of sailing competence and experience and who wish to progress to Offshore Yachtmaster and ultimately to become Club Skippers. END_OF_DOCUMENT_TOKEN_TO_BE_REPLACED

(an extract from BTOSC Spring 2010 Newsletter)

The BT Offshore Sailing Club season often starts with the Skippers’ Refresher Weekend, if no one has been intrepid enough to take on the “Frostbite” racing that starts a few weeks earlier. This is an opportunity for the Club Skippers to undertake a variety of exercises to keep their skills fresh and sometimes to develop some new ones. END_OF_DOCUMENT_TOKEN_TO_BE_REPLACED

Brushing up boat-handling skills? Sounds like a good idea. Taking to the water in mid-March? That may not sound such a good way to spend a weekend, and yet when our party met at Hamble Marina earlier this year for an early season refresher course, we were all agreed that it was going to be a great time.

Our instructor for the weekend was Chris Price, well-known to BTOSC members. There were three other candidates apart from myself and among us we had a range of experience – but one aim: to hone our skills in manoeuvring a boat.

On the Saturday morning, over the first cup of tea of the day, Chris explained how the course would be structured. Most of it would be spent with one of us at the wheel carrying out the exercise – this was unashamedly a practical, physical weekend. We would be getting ‘down and dirty’.

After familiarising ourselves with the boat and going through the safety briefing, we completed the final checks and set out for Southampton Water and the first stage of our learning. Chris went through boat shape above and below the waterline and how this affects the boats manoeuvrability, wind and tide and the all-important prop effect; work with it and it can make life so much easier!

With our introduction complete, it was time for us to put the theory into practice and re-acquaint ourselves with going forward and astern, describing a figure of eight and turning the boat in her own length. The Hamble proved to be an excellent place to (re)learn the basics of steering with plenty of space, little water-bound traffic and few onlookers to be puzzled by our repeated moorings alongside followed at intervals by the sound of our voices united in the mantra “wind on, spring off, tide open”.

The instruction was relaxed rather than intense – just in keeping with the mood of the sunny spring day. Chris would allow us to make our own mistakes (never a question of danger to life or damage to boat, I hasten to reassure the club Chairman!), but then explained what we’d done, and how we could put it right. The weekend was turning out to be fun.

And then we came to man overboard.  This is perhaps what most sailors are nervous about and fervently hope never to have to do for real. Practising time and again is the only way to overcome the nervousness and anxiety. With Chris’ expert tuition, we all managed – eventually – to recover our “man” swiftly and in tact both under engine and under sail. That was a very useful exercise and one that you can never repeat too often.

We put our newly rediscovered skills and confidence to good purpose during the afternoon when we practised sailing and motoring onto and off a buoy and anchoring. Over a pre-dinner drink, Chris talked us through rafting up and leaving a raft and explained the theory of running aground. And we left it there…..

One of the best things about the training course was that it didn’t just tell you what to do. Rather, Chris explained why we should handle the boat in a particular way. So instead of just turning the wheel and hoping for the best, we were starting to get a real understanding of how a boat steers. By carefully watching what was happening to the boat, we could anticipate what might happen next and handle the boat with ease.

Which was just as well. After a gentle cruise up the Medina in the unseasonably warm and sunny weather of Sunday morning, and a little more practice in stemming the tide with some ferry gliding thrown in for good measure, Chris set us our toughest test of the weekend.

The challenge was to reverse the boat into a space in the North Basin marina at Cowes. Fortunately at the start of the exercise the marina was fairly empty but as time progressed other boats – yachts and power boats, big and small – came into berth. It was a very narrow space with an angled approach and other peoples’ boats on either side. We’d seen this spot when we set off that morning, and there was no way I’d have thought I could ever steer a boat into that space without losing the push pit or some paint at least or gaining someone else’s guardrail en route. This was going to be a real test of how much we had remembered from our steering lessons from the day before.

For many people (and I hold my hand up here), berthing the boat in a marina is one of the most trying experiences to be had on the water. Attempting to come alongside in a busy marina somewhere in the Solent on a Saturday afternoon in the summer can test anyone’s boat handling skills – let alone their psychological stability.

But I managed – and so did the rest of the team. Because by now, we’d settled into the rhythm of the boat. By giving us plenty of hands-on experience, Chris’ coaching had increased our confidence to such a point that we wouldn’t throw our hands in the air when faced with a challenge like this. Instead, we took it calmly, slowly, and carefully. I think that’s what boat handling is all about.

For me, it was a thoroughly enjoyable refresher to the skills needed to handle a boat in a range of situations in close quarters. While we were chatting over a final cup of tea, it became clear that whether experienced or relatively inexperienced sailors, we had all learned a lot – perhaps more than we would have thought at the outset. And just as importantly, we’d all had an enjoyable time.

Many thanks to Chris Price and my companions on the boat-handling weekend, March 13th -15th 2009.