Kieran Madigan reports on a rather wet and windy introduction to sailing:

Why did we do it ?  Because we could!

For some years now we have, as a family, wanted to give sailing a bash. Having previously only encountered life on the waves on a Cross Channel Ferry it was a desire to see what made people want to get out and onto the water. Would we be bitten by the bug and become sailors? The BTOSC Introduction to Sailing weekend was the perfect opportunity to find out. Travelling down to Hamble Point, just outside of Southampton, on the Friday night I was a little wary of how this weekend would turn out. There were to be five of us on board – our family of three (we took the risk of bringing our 15 year old daughter along – how would she cope away from her home comforts for a couple of days!), the experienced Skipper, Andy, and another crew member, Nigel (neither of whom we had met previously). Having made our introductions it was off to the boat, “Viola” a Gibsea 37, to unload our gear. Once settled in we ran through a few safety precautions and what we would like to achieve from the weekend. Following this, it was off to the Ketch Rigger for a meal and a couple of drinks. A pleasant evening was had getting to know each other before getting down to the business of sailing.

After an interesting first night on the boat, the cabins were somewhat cosier than I had expected, Saturday morning came along. Sadly, so did the rain and the wind! After a hearty fry up it was time to get under sail. As advised, we had bought along our foul weather gear and it was soon obvious that this was going to be needed. As we left the shelter of the Hamble the heavens opened and the wind picked up – happy days! Heading out into the Solent it soon became obvious that this wasn’t going to be the best conditions in which to learn about sailing. Despite the Skipper’s best efforts to show us the ropes (quite literally), a couple of hours into our debut the decision was taken to head for the nearest port, in this case Cowes. Once berthed, we dried off and took stock of the situation. We spent the rest of the day exploring the area, had a meal together in the evening and hoped for a break in the weather for Sunday. Seemed like a reasonable course of action to me!

Sunday morning and the weather Gods had decided to smile upon us. The wind had dropped and the sun was shining. An early breakfast ensued so we could get onto the water and make up for lost time. 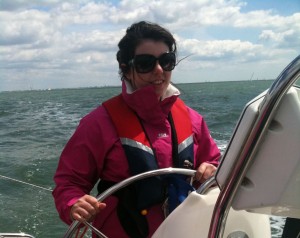 Andy could now show us a bit about sailing. Having learnt to tack the day before there were plenty of opportunities to practice this, there were a lot of vessels in the water to avoid! We all had turns at steering the boat – not as easy as it looks. Trying to catch the wind and keep the boat moving is quite a challenge. I was pleasantly surprised that my daughter took to it pretty well and looked quite accomplished at the helm. After some hours of much gentler sailing than on Saturday, you could actually relax now and take it all in, we stopped for lunch on the Beaulieu River. 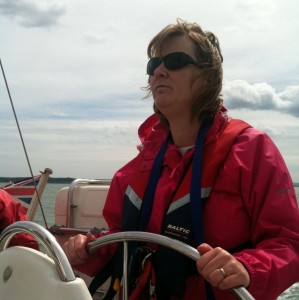 Once finished, it was time to amble back to Hamble. Now sailing downwind (or leeward I think in new found technical terms) we made good speed, stopping only briefly to re-fuel. Time now to clean the boat for handing back and get our stuff together. Oddly, it seemed like we had been gone for a lot longer than a couple days! Having said our thank yous and goodbyes it was time to head back to normality – just south of Reading.

As a social weekend, I thoroughly enjoyed myself – I couldn’t imagine much worse than being stuck on a boat with people I didn’t like! Skipper Andy was knowledgeable, understanding and welcoming. As a learning curve, I am pleased that I have finally got around to doing something that I’ve been promising myself for some years. As a hobby going forward, probably not for me – I didn’t get bitten. However I’m not sure if I can say the same about my wife! She’s started looking at proficient sailing courses and would no doubt do it again. All in all, give it a go – you never know, you may well find your Sea legs!!