Our first events of the year will be:

The BBQ Weekend is one of the highlights of the BTOSC Sailing Programme. This year, for the first time, we chartered Sea Essay and Freyja from Channel Sailing Division and East Coast Division of the CSSA as well Viola from Hamble Point Yacht Charters.

Freyja was chartered for 3 days from 1200 Thursday 13 Sep until 1800 on the Sunday. We took her over at Hornet Services Sailing Club. The outline itinerary for the event was:

This report covers Thurs 12 Sep – our passage to Southsea Marina.

Before embarking on the 8NM passage to Southsea Marina in Langstone Harbour we took the opportunity to do some boat handling practice north of Burrow Island in Portsmouth Harbour itself.

END_OF_DOCUMENT_TOKEN_TO_BE_REPLACED

The following report is from Ian Davis – entitled “Round the world to Dartmouth” :

The July West Country Cruise proved popular this year with eleven club members setting sail from Queen Anne’s Battery, Plymouth in two vessels chartered from Liberty Yachts. Many thanks to Hazel for the organisation.

END_OF_DOCUMENT_TOKEN_TO_BE_REPLACED

The benefits of BTOSC membership are:-

We had three yachts out for our Spring Rally weekend (3rd Event of the year). Once again one yacht (Freyja) was pre-booked for an extended weekend based out of Hornet SSC. The other two, Apaloosa and Viola, were chartered from Hamble Point Yacht Charters. Several members also joined the AGM and meal on foot.

All yachts converged on the central Solent on Saturday evening for our AGM, prize giving and an excellent rally supper at Hornet.

We had some rain on the Friday and Sunday but otherwise the weather was mainly mild and warm with light winds.

For the record, Frejya”s 3.5 day itinerary was as follows:

Friday: An 18.30 briefing followed by a night passage from Hamble to East Cowes with each skipper taking turns different sections of the passage provided good material for later discussion and feedback. Discussions on a variety of skippering topics followed. Sharing of lessons learned and generally putting the world to rights. Pasta bolognaise, garlic bread and the obligatory cheese board.

Saturday: Boat handling on Medina River in tidal conditions in and around East Cowes and at the Training pontoon near the Folly. Lunch – Beaulieu. Lymington Yacht Haven. Re-aquaintance with the Ship.

This tower which sleeps 4 and can be booked is owned by the Landmark trust. For further into see:
https://www.landmarktrust.org.uk/search-and-book/properties/luttrells-tower-11322#Overview

Hi all, here is the programme for 2019. Hopefully there is something for everyone whether you are crew or a skipper. The MS Excel version of the programme can be downloaded below. Over the coming days, the other events will also appear under the forthcoming events menu item on the right hand side of this page.

As always, please express interest early, either directly to the appropriate Event Manager or via the crew mailbox btosccrew@gmail.com

Suggestions for other events are always welcome. Even better, if you are happy to organise an event then please volunteer to do so.

I am sure that just thinking about the Christmas Jolly makes some people shudder. However, once again we were not disappointed either by the weather or the level of enthusiasm and support from members.

We had three yachts on the water. Appaloosa was booked for the weekend. Sea Essay for the Fri, Sat and Sun and Viola for Sat, Sun and Monday. Our pre-booked meal was on the Sat night in Hythe.

END_OF_DOCUMENT_TOKEN_TO_BE_REPLACED 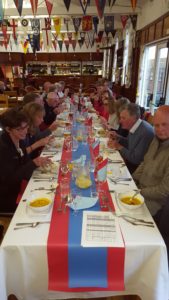 The BTOSC Spring Rally is an annual event during which we also hold our AGM. Last year we offered members a three-day charter on one of the yachts.  Following on from the success of that, this year the plan was for at least 2 yachts to be chartered for 3 days.   In a change from arrangements in previous years we chose Hornet Services Sailing Club as a venue for the AGM meeting and dinner. END_OF_DOCUMENT_TOKEN_TO_BE_REPLACED

Here is a link to a PDF version of the BTOSC Sailing Programme for 2018.

Since we have not had enough interest in the Laying Up Cruise / Trafalgar Night event this event has now been cancelled.

The committee is currently working to develop next years Sailing Programme which we hope to publish before our next event the BTOSC Xmas Jolly.   This year we will be returning to Lymington and having our pre-Christmas meal at the Ship.   If you have not yet booked, please do so now so that we can finalise the yacht charters and berth allocation.

Just a quick note to encourage you all  to book now for the Trafalgar weekend / Laying up Cruise and also the Xmas Jolly.

If you are interested in taking part in the Trafalgar Event can you initially let me know as soon as possible at btosccrew@gmail.com. If we have enough crew to fill a boat then I will ask for payments and make a booking. The berth cost will be £190.

The Laying Up Cruise is a good chance to do some sailing before the winter sets in. This event is timed to coincide with Trafalgar Day [21st October] so if there is interest amongst the crew then a Trafalgar theme and possibly dinner can be incorporated into the weekend !

Trafalgar Day is the celebration of Nelson’s Royal Navy victory over the combined French and Spanish fleets at the Battle of Trafalgar on 21 October 1805.

This year’s Christmas Jolly takes place on 1 – 3rd December – Watch this space for more details. If you are interested please contact the Event Manager Mick Curran mickcurran@btinternet.com and copy the crew mailbox btosccrew@gmail.com.

The annual Round the Island Race took place over the weekend. The BTOSC entry was Fleur de lis chartered from Fairview Sailing.

The event was skippered by Les Nicholls. The crew comprised James, Andrew, John, Mike Steve, Kevin M and Kevin S.
The weather forecast was NW3/4 and we had an early start.

It was a very different race to last year although  no-less exhausting for some reason.

We did very well in comparison to the other yachts in Fairview’s matched fleet coming 3rd out of 16 that were entered.  C’EST SI BON was the fastest Fairview yacht finishing only 5 minutes before us.

John Kelly (tactician) has now analyzed our performance.  He reports that:

The latest version of the BTOSC 2017 Sailing Programme was emailed out to members tonight as part of a newsletter.

A PDF version may be downloaded from BTOSC Programme V1 Jan 2017.