[topcollage images=4 start_with=3]
The 2010 cruise to the Scilly Isle was a 7 day event (Friday to Friday), on “Ventis Secundis”, a 40ft Delphia hired from Trisail of Falmouth. (http://www.trysail.net/ventis-secundis). With skipper Chris Price, and crew of 6 – Roy Cullers, Richard and Trudi Kidd, Chris Webber, Jonathan Peters, and myself, John Kelly. For most of us, the main attraction was the allure of the Scilly Isle, so we were pleased to spend most of the week there, with several very pleasant afternoons ashore. For Chris the main objective was to handle the very tricky pilotage around the Scillies without adding to the huge numbers of wrecks in the area – an objective he met in full, giving us all a lesson in charts, transits and pilotage. And lessons on navigation apps on Chris’s iPhone, but that’s another story.

Overall we had a most enjoyable week; perhaps not as much sailing as we would have liked (due to winds), but it was a great way to see the Scilly Isle. If we could be guaranteed quiet weather, then there are many islands and coves yet unvisited that would justify a second visit. But if the weather is unsettled, then be warned that the mooring options are limited.

We arrived at Falmouth on the Friday at around 15:00, bought and stored the provisions, got out of the Falmouth Yacht Marina at 18:00 and made the short hop down to the Helford under sail in perfect conditions. Going into the Helford entrance we were welcomed by a lot (I’m assured the correct term here is “pod”) of dolphins, looping and diving around us. The magic continued as we went up the amazingly peaceful and verdant Helford and found ourselves a free visitor’s mooring. Dinner aboard, with the stars coming out over our heads.

On Saturday 4th we slipped the mooring at 7am, with the intention of reaching the Scilly Isle in one hop (60 miles) if possible, with Penzance as an option. With strong SW gales forecast for the Sunday, there was a real incentive to do the full passage, with the constraint that we needed to find a mooring that was sheltered from the SW. Chris identified Watermill Cove, an anchorage of the sheltered NE of St Marys, with easy navigation coming in from the east. With light winds, on the nose (W 2), we quickly realised we would need to motor, but that we could nevertheless make the Scillies before nightfall. So once around the Lizard, we headed due west. The passage passed without incident, other than a few lost breakfasts, caused by the moderate swell running in from the SW. In fact, one of these breakfasts ended up spread across Chris’s jacket, an unfortunate incident that could have led to a day in the bilges, or hanging from the yard arm in less enlightened times. Eventually a row of dots appeared on the horizon, which slowly resolved themselves into St Marys and outlying islands. We found Watermill Cove with ease, ran in slowly and dropped anchor. Hence to dinner, and a quiet and comfortable night, with a choir of seals on the rocks singing us to sleep (I exaggerate only a little).

On Sunday 5th we woke to the forecast SW 5-6, grey skies, and our first attempt at pilotage around the Scillies. The granite geology has scattered with Scillies with piled rocks, tors and standing stones, both above and below the water. The rocks below mean that passages have to be made with care and accuracy, while the tors above provide many fixes and transits to aid that process. We set off with the intention of visiting St Martins, and the charts indicated a sheltered buoyed mooring in Tean Sound. We threaded our way there under engine, with a strong cross wind, continuously monitoring depth, transits and bearings (backed up by SatNav, of course). But on arriving at Tean Sound, we found the wind howling in and so retraced our steps and headed instead to Old Grimsby on the NE shore of Tresco. We were lucky to get the one remaining buoy, and this proved comfortable (although possibly exposed if the wind veered NW overnight). So by mid morning we were all ready to set foot on Scillonian soil. (OK, more rock than soil, but you’d miss the alliteration)

We had a number of complaints about Ventis Secundis – nothing broken or missing, just poorly designed or inadequately provisioned. The worst such item was discovered when we inflated the tender for the first time – it was too small to fit more than 3 with safety, 2 if there were any sea running. So getting all 7 of us to shore meant 4 runs, taking significant time and fuel.

But we reached shore with only minor incident (Jonathan christening his nice new boots), and set out to walk across the island to New Grimsby on the SW shore. All of 400 metres. Here we found the New Inn (well, the only Inn), which offered shower facilities. If this were not excitement enough, the early arrivals caught the end of the afternoon set of what I am told was an excellent band. Once we’d caught our breaths, we took an hour to walk around the south of Tresco, passing the famous semi-tropical gardens (closed), and the heliport, where the air traffic control appeared to be operated out of a garden shed. We were later told that the gardeners do actually double up as airport staff, dropping their spades when a flight is due in. After further refreshment back at the New Inn, we took another hour to walk the north end of Tresco, hence back once more to the New Inn and dinner.

On Monday the wind had dropped a little, and we dropped off the mooring after a leisurely breakfast and tiptoed carefully around Tresco and across to the big city – Hugh Town on St Marys, population of over 1000 (!). Here we tied up on the main jetty just long enough to pick up diesel, water and pasties.

We then moved on to our destination for the day – The Cove, between St Agnes and Gugh (pronounced “Goo”, to rhyme with “view”, causing some amusement. But not as much as Gt Wingletang rock, on the SW approaches to The Cove). The Cove proved to be an idyllic anchorage – clear water, a gentle curve of sand, and sunshine. We took ourselves ashore for the afternoon. 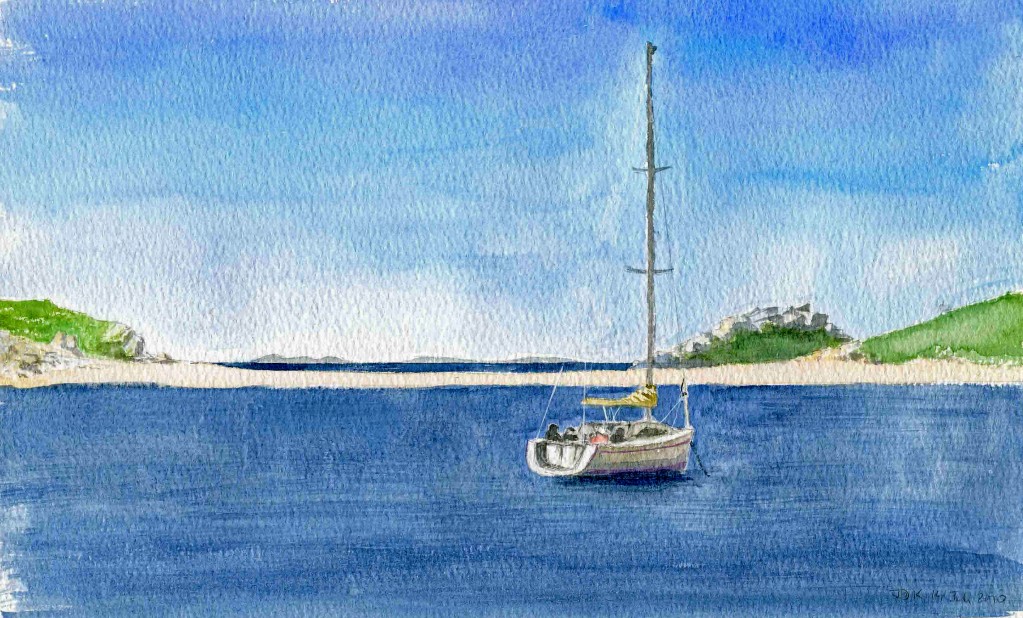 Here we walked around St Agnes (ice cream at Troy Town Farm shop), and so back to the Turks Head. After the first pint, the party split between those who wanted to continue patronising the most south westerly pub in the UK, and those who wanted to walk around Gugh. Eventually back to the boat for dinner, where Chris W and I learned how to cook a chilli sauce.

On Tuesday we woke to a gentle SW, slowly filling in to a SW3, and sunshine. So Chris suggested we take the opportunity to get out into relatively clear water, break out the sails, and “race” out to the Bishop Rock light and then back down the Sound to St Marys. This was great fun, and took us back to St Marys, where we picked up a visitors buoy at 14:30. We were easily the first boat across the line, which shows the advantages of racing in a fleet of one.

Hence ashore, and an hour or so looking around Hugh Town before finding dinner ashore. We were back on the boat at 21:00 and looking forward to an early night before an early start back to the mainland next morning.

But we found that the SW was picking up and threatened to make the exposed visitors moorings quite uncomfortable. So there was a quick decision to run round to Watermill Cove. We slipped and headed SW (anticlockwise) around St Marys. Once the wind came abeam we ran out the genoa and chased along in 25 knots of wind and a following sea. Richard, on helm, was grinning from ear to ear. Arrived Watermill Cove at 22:00 in gathering dusk. Prayers for a quick mooring were thwarted when the anchor found nothing but weed and refused to hold. There were some nervous moments, but on the 4th or 5th attempt it held and we rushed to our bunks.

On Wednesday our destination was Penzance, and with a 3 hour window to enter the harbour and high tide at around 13:00 this meant slipping by 06:00. This we achieved, and we then hoped to be recompensed by a blistering run back in the SW 5-6 of the previous evening. But the wind had melted overnight to SW2, so we reluctantly engaged the engine once more in order to meet our narrow entry window. The joys of helming under engine were palling by now so we switched on the autopilot and settled down to playing I Spy and snacking.

In Penzance we were rafted up 7 deep alongside an eccentric collection of houseboats and derelicts. No water or power, so the £25 charge seemed excessive. We might have been better off in Newlyn. The inner berth of the 7 was flying the skull and cross bones – a pirate-themed tourist shop. The customers must have thought the ill-kempt crew existing via the gangplank were all part of the performance, not realising it was just another BTOSC member in search of the showers.

On Thursday we had a late start, constrained by the 3 hour window to exit the harbour. We filled the time by lashing up a comprehensive brunch; bacon, egg, beans, etc. We set off just before 13:00 on the run to Falmouth, again reluctantly under power due to the light SSE. Again we deployed George the autopilot, while we cleaned up the remnants of our provisions.

Off the Helford we were entertained by more wildlife; this time gannets diving on a school of fish.

We got back into Falmouth by 18:30, in good time to make a start on cleaning the boat, and fixing up dinner. The boat was ready in good time for the 10am handover on the Friday.