The event was organised by James Savage to with the aim of completing a cross channel voyage from Hamble Point to St Vaast and complete two YachtMaster qualifying passages. We arrived after 1700 on Thursday to be greeted by James and Mike who were checking the inventory before taking over the boat, a Halsberg Rassey 36 “Aeolus”.

Casting off at 1900 the plan was to exit the Solent at the eastern end, round Bembridge and then head south for St Vaast,  arriving at around 1100 Friday to catch the tide and the opening times for lock into the marina. 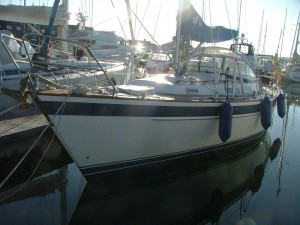 The wind however, was not favorable so we had to use the engine until well past Bembridge.  Being an over night passage we organised ourselves into 3 watches of 3 hours each.

As I some how ended up on the 0300-0600 watch, I retired to my bunk at 2100 whilst we were still in the Solent. On being woken to go on watch at 0300 I arrived on deck to see the lights of the IOW just behind us and some interesting plots on the chart.  I knew then it was going to be a long trip. With the GPS still showing 60 miles to go dawn came and went but we were at least making 5kn in a southerly direction.  But as the morning went on it was apparent that we would not make St Vaast in time.

Plan B came into being and we headed for Cherbourg arriving around 1700. 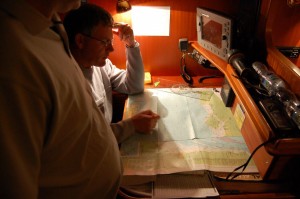 You think we are there!

Mark and Mike set out on a scouting mission to find a suitable restaurant for Friday night.  It needed to be French, serve fish soup and steak.  Their choice was good and we had an enjoyable meal.

Saturday Plan C or was it D?

Go to St Vaast on Saturday morning and night sail back to the Hamble or day sail to Poole and on Sunday sail back to the Hamble. Poole won the day and we day sailed back to Poole.  During this leg of the trip James rigged up a strange contraption in the shrouds with a cable back to his laptop.  We now had an AIS receiver which showed the position of all shipping with a transponder in our vicinity.  No sooner had we reached the shipping lanes and its alarms started going off.  The screen showed a frightening sight, 5 large ships in a wedge formation all coming at us with a high probability of collision. I returned to the deck and decided to use the mark one eye ball which showed there was space for us to pass safely through.  (BTW high probability of collision is passing within one mile).  It was a useful piece of kit for £80 which in poor visibility would assist radar information.  We arrived in Poole at around 1800 and berthed in Poole Quay Yacht Haven.  If you’re going there check the layout as the numbering is somewhat strange.

That night Chef Savage in the style of Chef Ramsey prepared a very good pasta dish and we stayed on board drinking beer and wine.

We sailed out of Poole  and headed for the Needles channel.  The light was good and Old Harry and the other stacks  stood out.  During this period we had numerous discussions on sail setting and tried outs some ideas, however most of mine did not work. On entering the Solent we decided to have lunch in Newtown Creek. Tom offered to navigate us in and we anchored amongst several other yachts.

After lunch the wind picked up and we sailed back to Hamble under the genoa achieving 9kn at times. This seemed fast until Artemist Profit Hunter an Open 60 Ocean racer went past us with a rib trying to keep up. 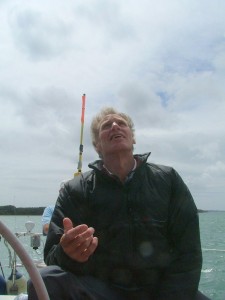 The long weekend was very enjoyable and we achieved most people’s goals including Mark who managed to read his book.  A big thank-you to Alan who sat back and let us get on with it. 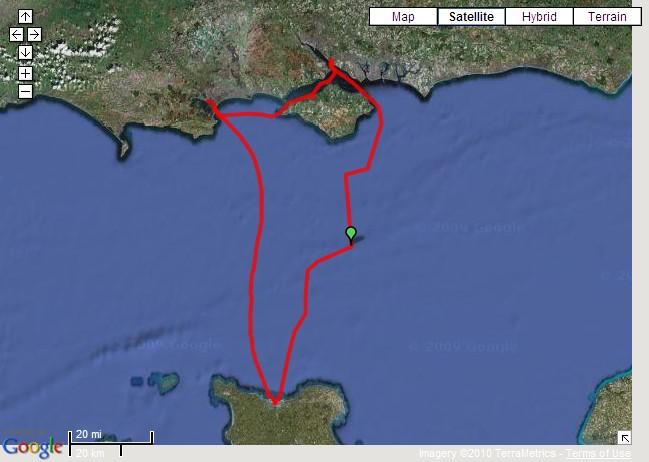