The BT Offshore Sailing Club entered one yacht with a crew of 8 for the RTI race this year. The yacht was a Sunfast 37 chartered from Sunsail but skippered by Andy Shrimpton one of the BTOSC Club Skippers. Hazel Bagnall was the BTOSC event organiser. The charter was from 1200 PM on the Friday until 5 PM on Sunday evening. 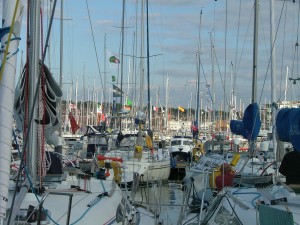 The outline plan was to meet on the Friday at about 1200, at Port Solent, prepare the yacht and then head over to Cowes. On our way across the Solent we took the opportunity to practice raising, flying, trimming and putting away our spinnaker. This was a new experience for several members of the crew but we needed to be ready and able to work as a crew and use the Spinnaker safely the following day. With our crew training complete we joined the mêlée of yachts all heading into Cowes for the night. All Sunsail yachts were pre-booked into the south basin. We ended up rafted up on the outside of 6 other Sunsail Sunfast 37 Yachts. The evening was dominated by the England v Algeria World Cup displayed on large screen TV on the quayside in Cowes.

The tides necessitated a start time of 0520 barely 30 minutes after dawn. 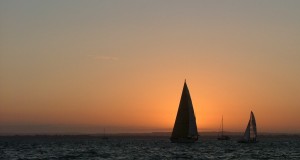 Only Andy the skipper and one of the crew had done the RTI before.  The weather was kind and we had an excellent downwind start and flew the spinnaker for nearly half the race.

Congratulations to Chris and Mike who were sailing Sunsail 12;  they were placed 9th in class with a time of 8 hrs  57 minutes.

Thanks Andy for skippering and Hazel for organizing the event.   Read on to see more photos from the event…