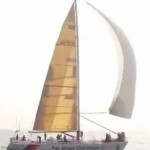 See also some YouTube videos at the end….The Fastnet race is the biggest race in the UK sailing calendar. It starts at Cowes, goes around Lands End, over to the Fastnet rock off south west Ireland and then back to Plymouth outside of the Scilly Isles.

605 miles in a straight line but many more on the water. It’s organised by RORC (Royal Ocean Racing Club) and is held every 2 years. If you plan to do the race you need to plan for a campaign. Since 1979 when a major storm hit the race and people died the requirements are for at least 50% of the crew to have done 300 miles offshore racing prior to the Fastnet race. This normally equates to 3 RORC races leading up to the Fastnet race itself.

This year I was lucky enough to compete on a Challenger 72 as Mate. The campaign started with a training weekend in light airs… 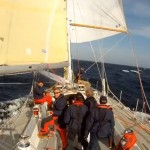 and was followed by 3 races with varying winds up to F8/9. By the time we got the Fastnet race we had been through every condition so we felt prepared. 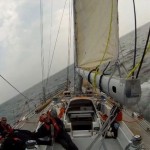 The races we entered were:  The De Guingand, The Cervantes and The Morgan Cup but there were plenty more to choose from.

The Fastnet race started midday on Sunday 14th August after Cowes week. It is normally a beat to “the Rock” and a spinnaker run back. It didn’t quite turn out like that this year. We started with the beat out of the Solent in F4/5 and continued to Lands End. From there we had a short spell where the wind came aft and we were doing over 11knt through the water in the right direction for a good bit of Monday night. I think we covered close on 50nm in just over 4 hours! The wind returned to normal after this and it was back to beating and then as we closed on the Rock around midnight Tuesday the wind died altogether. The forecast had been for the wind to back so we were high of the rhumb line and that allowed us to drift with the tide. As the wind slowly filled over the next 4 hours we slowly ghosted past the Fastnet rock in the night. Around 0500 Wednesday morning the wind was back and we were off on a beam reach back to Bishops Lighthouse on the Scilly Isles. It wasn’t the kite run we had hoped for but 9.5knts in the right direction was pretty good.

On rounding Bishops we hardened up and started tacking towards Plymouth, which was different from some of the other boats we were racing as they had a lift that took them up to the Lizard to catch the tide. This gave them about 10 miles lead on us.

However, the race is not over till you cross the line. The lead yachts sailed into holes with no wind and had to anchor in 70 metres to stop themselves going backwards with the tide. We managed to keep our boat sailing at a couple of knots using our spinnaker on a very shy reach. Around midnight on Thursday we were closing on the finish line to find we had overtaken 2 of the other 3 Challenger yachts. The last one was about a mile upwind of us. Touch and go!

As the wind stayed fickle we stayed on our course and were slowly lifted up towards the middle of the breakwater in Plymouth whilst the other Challenger was sailing straight towards the line. From the middle of the breakwater we knew we had to tack to cross the line but would be coming in on Starboard. At this time a lot of the smaller yachts had caught up in the light winds and there were around 60 yachts trying to finish together.

As we watched the other Challenger on AIS it slowed and as the wind went light and the tide pushed them back. We were a little further out from the headland and kept the wind, plus the breakwater shielded us from the tide. We tacked and screamed across the line at 3 knots. The screaming was us cheering as we had won our race amongst the 4 Challenger yachts. Incredible that we all sailed around 750 miles but were almost in sight of each other at the end.

This was my third Fastnet but I think I’ll be back for a few more yet.

I took a some video during the races. I’ve attached the Youtube links if you are interested. The clip of me climbing up to the pole to spike the kite at the Greenwich Light Vessel is my favourite.