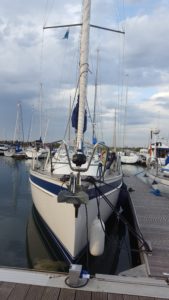 The original plan to hold the Skippers’  Refesher in March had to be cancelled due to forecast gales and blizzard conditions.

Not wishing to be beaten we re-convened a month or so later on a Atlas a Halberg Rassy 34 chartered out of Hornet.

As usual, the objectives were to dust off the cobwebs after the winter; practice essential skippering skills such as mooring, boat handling and MOB.  Here we are successfully lassoing a buoy in the confines of Portsmouth Harbour before sailing to Chichester Harbour and Northney Marina where the last leg requires a precision approach to avoid shallows either side of the narrow approach channel.

Next morning we explored the area around the  marina and discovered a BBQ area that could perhaps be useful in future years.  We then practiced boat handling skills and tested out a number of short-handed berthing techniques that did not lend themselves to photographs before exploring other areas of the harbour.

First stop was a visit to the Emsworth Visitors pontoon which was quickly followed by an opportunity to calibrate our very erratic depth gauge over a gentle but unplanned lunch stop while we waited for the flood tide to work its magic.

We then took the opportunity to familiarise ourselves with visitor moorings at Itchenor before heading back to Portsmouth.

Over the weekend we were also able to share a number of experiences and ideas and to familiarize each other with a number of less frequently visited moorings, anchorages and marinas. 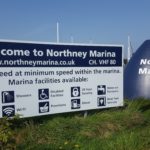 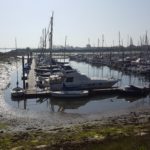 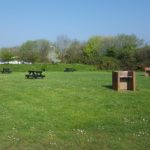 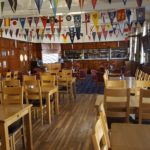 We were also able to get the lie of the land at Hornet Services Sailing Club where we would be berthed during the AGM Spring Rally.

Many thanks to all the skippers who could make this rescheduled event.  It was a most worthwhile weekend.