The annual Round the Island Race took place over the weekend. The BTOSC entry was Fleur de lis chartered from Fairview Sailing.

The event was skippered by Les Nicholls. The crew comprised James, Andrew, John, Mike Steve, Kevin M and Kevin S.
The weather forecast was NW3/4 and we had an early start. 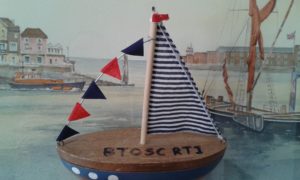 It was a very different race to last year although  no-less exhausting for some reason.

We did very well in comparison to the other yachts in Fairview’s matched fleet coming 3rd out of 16 that were entered.  C’EST SI BON was the fastest Fairview yacht finishing only 5 minutes before us.

John Kelly (tactician) has now analyzed our performance.  He reports that: