The 2016 Christmas Jolly took place on the weekend of the 3rd/ 4th December, with Mike, Roy, Hazel, Chris and Roger onboard Appaloosa and James, Mick, Andy, Steve, Adele and Ed on Sea Essay heading to the Ship Inn in Lymington..

On the Friday afternoon most of the crew of Appaloosa met up at Hamble Point Marina and enjoyed a social evening in the Ketch Rigger joined briefly by Mick, the event manager, delivering a mainly cheese based quiz.

Saturday morning started cold and bright with a 15-20 knot easterly, Hazel arrived just in time to do the breakfast washing up, and fully crewed Appaloosa slipped from the marina and under full sail headed west for Lymington.

Sea Essay had spent the night in Mercury Yacht Harbour and inexplicably headed east along the Solent. Were they headed for Littlehampton, or was it a case of civil service chart failure? When pressed, a desire to make most use of the tide and visiting Osborne Bay were reasons offered. 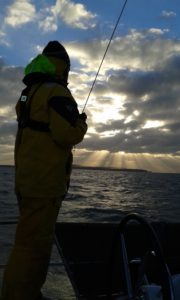 Picking up a buoy outside Yarmouth for lunch was abandoned due to the 30 knot wind and resultant swell, but a quick reef and a short battle with the tide bought us into Berthon Marina in Lymington. And as the sun set, we were joined by Sea Essay in an adjacent berth.

Mulled wine, cheese related questions and showers occupied the crews before we headed to the Ship for dinner.  A number of non-sailors, joined us for the festivities and having wined and dined well the evening finished with a port or two and a vast selection of cheeses on board Sea Essay.

After some early morning pontoon bashing courtesy of the frost and with all trousers located, we followed the IOW ferry back into the Solent. 35 knots of wind necessitated 3 reefs but with tidal assistance we tacked back to Hamble in a reasonable time.  Sea Essay saw a bit less wind for some reason but was back in Souhampton Water by 13.30 and dropped anchor for a leisurely lunch on deck in the sunshine near Netley before heading back to Mercury Marina.

With great sailing, good food and company, it was, all in all a very enjoyable weekend. Thanks to Mike and James for skippering and Mick for the organization.