Congratulations to the BTOSC team (Skipper Mark Gaastra; Crew David Pettengale; Roy Cullers; Peter Kinsella; John Kelly) who returned from an enjoyable week (25 Oct – 2 Nov 2014) in Greece, well pleased with their racing results – overall 3rd in class, and a cup to prove it. 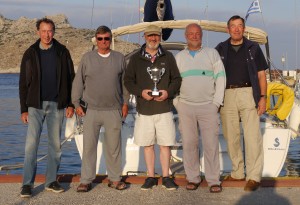 The Blue Cup is organised by Vernicos Yachts, now a member of Dream Yacht Charters. The event involves some 50 boats racing from town to town down the Saronic, with meals and partying organised for us on 3 nights. A feature of the event is the large number of Norwegians who come annually, and take both the partying and the racing seriously (well, some take the racing seriously, some really appear to be there just for the partying).

The weather was not altogether kind – cool and grey quite a bit of the time (and in sharp contrast to the UK, which enjoyed record breaking high temperatures for the period). But in compensation, there were reasonable winds much of the time, with racing every day.

We were in a 40ft Beneteau Oceanis, racing in Class A

– the 20 slower boats in the regatta. The racing was all scored on handicaps. The handicaps are averaged across all conditions, and a general pattern seemed to be that the smaller boats were disadvantaged in lighter airs, and advantaged once the wind went F4 and above (as witnessed by the Tue Legs 2 and 3 results, when the class A winners were also the overall class winners).

Some photos of the team; https://www.dropbox.com/sh/yg9otlrkao5eyk5/AAD3DpTlEHeCqulB5-Crw2IYa?dl=0

Most of us came out early, which enabled us to get set up and get out of the marina on the Saturday. This was generally considered to be a good thing.

As soon as Peter arrived, 14:00, we got off the moorings and sailed across to Egina.

We aimed for an early departure, but were foiled by crossed anchor chains. As in all the Greek harbours that we went in, we were moored side by side, stern to onto the jetty with the bow anchors out forward. This gives every opportunity for those bow anchors to cross. It took us over an hour (mainly waiting for the other boats) to untangle the chains and depart.

Sailed to Epidavros, got in before the larger part of the fleet and were able to moor directly onto the jetty. Later a couple of boats moored bows to on top of us, and a remarkable 15 boat raft formed off one of the other jetties.

The first of the big communal meals was given in a local taverna; food and wine, music and dancing.

There was a race postponement due to very light winds off Epidavros, and eventually the fleet motored to the alternative start at Aghios Georgios off the north east corner of Methana. Here some wind filled in, and the race went ahead. We made a decent start and were up with the leading boats on a broad reach to the small island of Ns Plateia. Here we gybed, and again broad reached down to the line at the western entrance to Poros. Although some of the class B and C boats went past us, there were no significant place changes on this leg.

We moored on the quay at Poros, facing onto the cafes. Later David led us up the back of the town to Dimitri’s restaurant, which majors in meat dishes. The food was great, and obviously it has a reputation since both the Vernicos team and some of the more seasoned Norwegians were booked in.

We started the race in the middle of the fleet but soon we were on our own as the majority of the fleet went a lot further out than us. We had decided to take the shortest course and head straight for the headland. The wind was blowing onshore and we were on a broad reach.

By the time we reached the headland we had pulled up a couple of places. All the boats that had gone further out were converging with us as we approached the headland. We made the decision to continue on our course for about half a mile and then we changed course towards the finishing line, gybed the mainsail, and started goosewinging towards the finishing line. We had misjudged the course slightly and instead of being directly behind us, the wind was about 5 degrees off.

Although the Genoa was occasionally collapsing with the rolling of the boat, we were still slowly overtaking many of the other boats, and we maintained our course until 50 metres from the finishing line when we gybed the Genoa to cross the line on a starboard tack. The boat in front of us misjudged the line and ended up on the buoy.

We had crossed the line in 5th or 6th place but as always until the handicaps were worked out, we did not know exactly how we had done. The finishing line for race 2 was also a passing mark for race 3 and we were now racing again, and I handed over the helm to Mark for the next race.

Continuing through the gate to the finish line at Ermioni was a straight line broad reach, we headed directly there on starboard tack. Much of the fleet sailed well to the west (upwind) of the direct line, but since both tracks were in open water, well clear of any wind shadow, we don’t understand what advantage they thought it gave them. But there must have been something going on, since Christos dropped from 2nd to 5th, Smaragda came from 4th to 1st, and Firenze came up from 7th to 3rd, while we dropped one place to 4th. Very puzzling.

The race is fast, and we arrive at Ermioni in time for lunch. We moor on the quiet southern side  – a good choice. Lunch and beers, a walk around the town, a rest and then the skippers meeting by the port of Ermioni (north side) followed by free food.

After reasonable start we set off for the first mark at Ak Thermisi with a F2-3 fine on the port bow. I made the mistake of trying to get upwind (turning to port) of the leading boats, only to realise that we should instead be well downwind (starboard) in order to clear the wind shadow of the high cliffs to port at Ak Thermisi. So we went out wide; that certainly pulled us up on the inshore boats, but left us behind Smaragda, the most consistently successful boat in our class, who had chosen to go wide from the start. Nevertheless, on rounding the first mark we weren’t too far adrift of the leading boats.

But things went downhill on the long run down to the second mark at Dokos island, with the wind dropping out completely at times, leaving us stationary. Smaragda made the decision to go out way over to the starboard of the course, well off the straight line to the mark, and that was probably the crucial decision that eventually saw them finish 30 mins ahead of us, since there was a tiny bit more wind out there. A second factor was probably our light wind sailing – there were times I lost all boat speed and any sense of where the wind was coming from. With more practice, and more tell tales, we might do better. After a slow gybe at the Dokos mark, we were on a beat back to the line at Ermioni. For the first 30 mins, this was as agonising as the run, with very little wind.

Fortunately we ended on a high, as the wind filled in to F3-4 putting us on a starboard tack to the line, then lifting a little allowing us to fine reach down on the line. We seemed to have great boat speed and were pulling up fast on the boats ahead (although only managed to actually take one boat before we crossed the line). Amazingly after 3 1/2 hours, we were among 5 boats that finished within 2 minutes of each other; we could have been 10th, or we could have been 15th, so I guess I’ll settle for 12th. Fortunately we are allowed to discard one result for our overall score, so it was kind of harmless.

In the evening we went across to the north side of Ermioni for the announcement of results, and dancing provided by the municipality of Ermioni. This was brought short by rain, and we crossed back and went to a local fish restaurant for dinner. OK, but the food was disappointing.

Our only really sunny and warm day. Very light winds initially, but eventually settled to a SW F2.

We sat on the start line at Ermioni for over an hour; many crews went swimming or indulged in other foolishness. Eventually we all motored off to a new start at the gap between Dokos Island and the mainland.

With the wind in the SW for the only time in the week, the finish line was straight upwind, and the course was one long beat. We went out, more or less up the middle of the course, while much of the fleet went off to the right (western) side. On previous years this has offered more wind, but it didn’t work this time. We noted that Smaragda initially opted for the right hand side, but changed their mind and came out and followed us. Later in the race, however, they reverted to the right hand side, and this time it did advantage them, as they finished some minutes ahead of us.

At times we were sailing close to other boats, and it’s worth noting that our boat speed and pointing compared well.

As soon as we moor up, the Norwegians start to party. In the evening, the big final party with prizes and fancy dress. We enjoy taking our cup for 3rd in class.

With a long way to go to get to Egina, we start at 8am and motor ENE into the wind, past Hydra. Once past the corner, we change bearing to NW and sail for a bit, passing Poros, and taking  lunch in the sheltered waters. Then on to charming small village of Perdika to the S of Egina island.

Breakfast on the quay in pleasant sunshine.

But when we set off, the wind had now picked up to NE 5-6, we put on all the clothing we have and motor sailed into the seas back to Alimos marina.

In the evening we took some time to find a restaurant; we eventually found Vassilis restaurant on Davaki Rd. Very nice, all had liver.