This weekend could so easily have been a washout. Everyone had expected it to be windy having seen the forecasts earlier in the week.  Our objectives were not ambitious.  The club had chartered 3 yachts for the weekend. One these yachts was the yacht we have chartered for the forthcoming RTI- that crew were hoping for some practice in preparation for the big race.

The passage to Cowes was uneventful. We were encouraged -no instructed, by our charter company to motor across given the expected conditions; however, as a precaution, we elected to rig the Storm sail so that it was ready for use if we had needed it.  All 3 yachts had a safe and uneventful passage with the only real challenge being to get along side in about 25kts of wind. Suffice to say, this provided good learning opportunities for all with no harm done.  The following photo was taken a little later when the wind had eased somewhat. 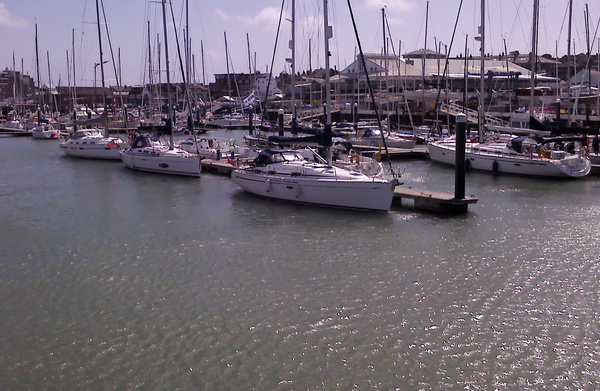 The AGM was held in the the Classic Boat Museum in East Cowes. This provided an opportunity to inspect the Chain Ferry close at hand.  The museum is located in the old sea plane hanger that you cannot fail to see when looking across the river from West Cowes.  The museum had some interesting displays and looked like it deserves a return visit one day.

At the AGM the Chairman welcomed our new Commodore and expressed thanks to John Wells for his support to the club during his tenure.  The Chairrman then presented a review of the club’s activities, the Treasurer presented the club accounts and a number of cups were awarded.  See minutes for details.

Following the awards ceremony we all adjourned to the top floor of the Red Duster for an excellent meal, some rather good Merlot if memory serves, in fine company.

After a leisurely start, the return passage saw the three yachts go their separate ways.  We had a brief diversion to Osborne Bay and took the opportunity to sail with the Storm Sail.

All in all, although we didn’t do as much sailing as we all would have liked. However the company and some choice victuals made up for this and I certainly feel that we made the most of it.

Thanks all for a good weekend. Roll on the RTI.